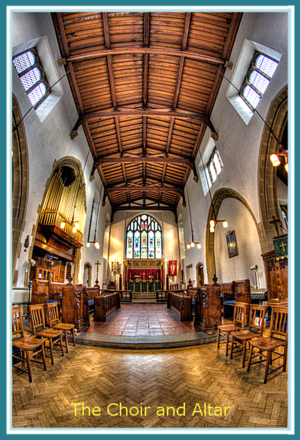 The church as we see it today is the second church building in the area that came to be known as Thorpe Bay. The first was built in 1913 in wood and iron, and stood where the church hall now stands. The parish itself was formed in 1921 out of the mother parish of Holy Trinity Southchurch, and was dedicated to St Augustine of Canterbury (the Archbishop of Canterbury being the patron of the living of Southchurch).

As the development of the area took place between the wars by the owners, the Burges Estate, it became clear that the plans for a permanent church that had been shelved during the First World War should now be pursued. By the mid 1920’s H W Allardyce of Barking was appointed the architect, with Sir Charles Nicholson as consultant. While Nicholson’s work is well-known, Allardyce is an obscure figure, and it is likely that St Augustine’s was his only ecclesiastical commission.

A variety of designs were produced, but the need to match the building to the budget available and the desire to see a church erected without undue further delay meant that a relatively simple design in brick with stone dressings was adopted. The aisles were built so that when funds allowed they could be widened, and a chapel on the south side of the chancel added - these have yet to be done. What is striking to the casual visitor is the sense of space, the striking stained glass window in the east wall, and its lofty height. A closer examination of the fittings, most of which date from the 1930’s and 40’s, shows the high quality of workmanship. 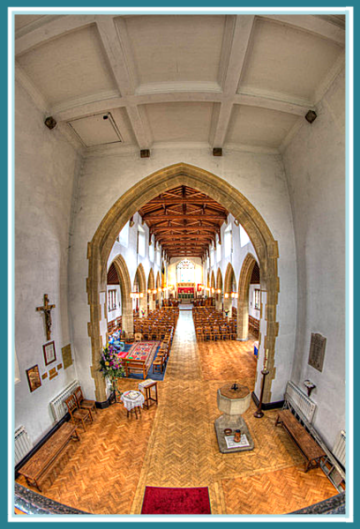 This view of the church, taken from the West balcony, gives a sense of the loftiness of the interior, and of the richness of the sanctuary decoration. 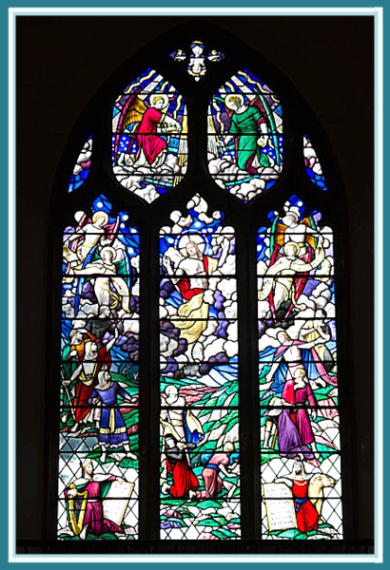 This view of the west end shows the west window by Mailes & Co 1957 depicting the Ascension and is particularly striking in the evening. Much of the other glass in the church was made by James Powell and Son of the Whitefriars glassworks, whose work bears the tiny figure of a whitefriar in the bottom right hand corner.

The “new” church, consecrated in May 1935, needed an organ.  Built in 1855 by Norman and Beard Ltd, and previously in St.  Paul’s Church, Winchmore Hill, London, the “kist o’ whistles” we use today was installed on approval and subsequently purchased in 1936 for £665.

A new starter motor costing £17 was fitted in 1962 but nothing more done until a major rebuild in 1983.  The organ appeal met its target of £27,000 and Martin Cross of Grays was contracted to do the work.  The design was a labour of love shared by Martin Cross and our then organist Victor Knill.  The result is an instrument that visiting organists admire for its range and versatility – the full specification is available on request.

Following the rebuild it was agreed by the PCC that the organ should be maintained with quarterly checks by the organ builders (now Shepherd and Cross following Martin’s death).  It was enhanced by gilding of the visible pipes in 2011 and refurbished at a cost of £13,680 in 2016.  Recently, in memory of Victor Knill the congregation and the organ builders jointly contributed to a cymbalstern. We are grateful that donations and legacies give us an organ fund that should ensure we hear sweet music for many years to come.

A note about Victor Knill, LTCM.  Although a banker by profession, Victor was passionate about music (for over forty years he was local secretary for Trinity College of Music) but particularly about organ music and he was devoted to the church. In 1996 he wrote “The Island Church”, a history of St Augustine’s which has proved to be a most useful reference source.  His early organ lessons were in Christchurch, Thorpe Bay, and St. Mary’s, Prittlewell, but when circumstances took him to that city, he studied at Leicester Cathedral under George Gray and, when posted overseas, took over from Clifford Harker as organist in Cairo Cathedral.  When WWII ended he returned to Thorpe Bay and was appointed organist of St.Augustine’s in 1946. He stayed in post for 65 years, retiring in 2011.

Nonetheless, Bach and Mendelssohn were the composers Victor liked best and we were very pleased that he was still in good enough health to attend a recital and hear some of his favourite pieces played by the Stephen King, organist of Brentwood Cathedral, as part of his 100th birthday celebrations in 2019.

The tower at the west end of the church houses the belfry, below which is the ringing chamber from where the peal of eight bells are rung by our team of ringers, or campanologists to use the correct terminology.

The bells, reputed to be one of the finest rings in Essex, were gifted by Albert Mitchell in memory of his wife, Annie.  They were cast by bellfounders John Taylor and Company of Loughborough in 1946 and were dedicated by the Bishop of Chelmsford and first rung on 31 July 1947.

Each bell has a name and the largest, the tenor bell, bears the inscription:-

WE EIGHT ARE DEDICATE

TO THE GLORY OF GOD

IN LOVING MEMORY OF

The names and weights of the bells are as follows:-

Each bell is fixed to a headstock mounted on bearings bolted to the bell-frame.  This substantial structure is in turn supported by massive steel girders that criss-cross the inside of the tower.  A large spoked wooden wheel centres on the headstock and around this passes a rope which drops down through a hole in the floor to the ringing chamber below.  Each bell is controlled by one ringer who is able to swing it through 360 degrees, pausing momentarily in the “mouth-up” position before swinging back the other way.  As may be imagined, the combined lateral forces created by all this violently swinging bell metal and steel is enough to cause the tower to rock slightly -  quite normal behaviour in bell towers.  A stout wooden “stay”, made from ash, is fixed to the top of the headstock and this engages in a slide bar bolted to the lower part of the bell-frame thus permitting the bell to be “parked” – very gently – in the “up” position.  “Standing” the bell, as this manoeuvre is known, is one of the many skills acquired by bellringers during their training.  Having all the bells in the “up” position enables the ringers to all start off in time when the person ringing the treble bell announces, “Look to, treble’s going, she’s gone”, as they pull off the lead bell.  The other ringers then follow in numerical order in what is known as rounds.  They judge their position within the peal by observing the rope of the bell they are following.  This is known as “rope sight”.  It is then up to the conductor to call the changes, thus altering the sequence in which the bells are rung.   Alternatively, they may conduct a “method”, this being a pre-determined pattern of changes which the ringer must memorise.

A ninth bell was installed in the belfry in October 2011, a gift of the Sentance family.  This is known as the “Clock Bell” and it is hung in a separate bell-frame.  The bell is rung by an internal, electronically-activated clapper linked to a digital timing device.  The bell itself is of historical importance having been cast in 1632 by William Land of Houndsditch.  It weighs 8cwts 1qtr 7 lbs (423 kgs) and bears the inscription:-

It was one of the bells originally hung in St John the Baptist Church, Mucking, which was made redundant in 1992.  After removal in 1993, the bells were stored at West Thurrock’s St Clement’s Church, a location for the film,”Four Weddings and a Funeral”.  The bells may be seen briefly in the film.

Our bells are rung regularly on Sunday mornings at 9.20am and on practise nights, Wednesdays at 7.30pm.  New ringers are always welcome.

Where to find us

We are located in the middle of Thorpe Bay, about two miles east of Southend on Sea and just a short walk from the sea front.  We are easily accessible by train (Thorpe Bay station is on the main line from London Fenchurch Street) and bus (Nos 1, 7 and 9), and there is ample on-street parking around the church. The church itself is on an island site at the junction of Johnstone Road and St Augustine’s Avenue.