8 am and lowered at sunset.

Individuals, local authorities and other organisations (that's us!) may fly the Union Flag whenever they wish, subject to compliance with any local planning requirements.

Flying Flags at Half Mast

Which way is up ?

The Broader diagonal white stripe must be at the top of the flag on the side nearest the flagpole. 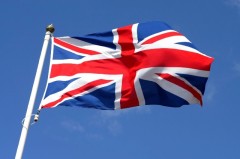 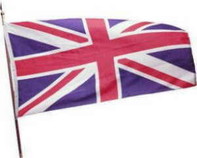 And ........... Our Vimpel.   Usually seen more frequently in Scandanavian countries, a Vimpel is a long triangular banner that is flown every day of the year whenever a normal flag isn't being flown.  Our Vimpel, with the cross of St George, should be fluttering in the breeze as we speak.

Where to find us

We are located in the middle of Thorpe Bay, about two miles east of Southend on Sea and just a short walk from the sea front.  We are easily accessible by train (Thorpe Bay station is on the main line from London Fenchurch Street) and bus (Nos 1, 7 and 9), and there is ample on-street parking around the church. The church itself is on an island site at the junction of Johnstone Road and St Augustine’s Avenue.